“Mergin Maps facilitates collaboration immensely, with different team members all using the same app and entering the same data. And I, working in the office, can get the data immediately and analyse them.” Phuong Nguyen of FFI.

An enthusiastic user of QGIS and Mergin Maps, Ms. Phuong Nguyen is a Biodiversity Assistant in the non-profit organisation – Fauna & Flora International. She facilitates field surveys with Mergin Maps and analyses the results in QGIS, to create reports for local partners in the conservation and tracking of gibbons in Vietnam.

Founded in 1903, FFI operates in more than 40 countries. FFI has been working extensively in Vietnam since 1997, focusing on the conservation of globally threatened primate species. The programme is working at present to conserve eight primate species in Vietnam, including all five that are endemic and critically endangered. The programme covers four gibbon species and is the largest gibbon conservation programme in the region.

“King of the Swingers”

Gibbons are the most threatened primates on Earth. Their habitat is being destroyed and they are often hunted and captured, to be sold as pets and for use in traditional medicine. There are over 20 known species of gibbons in the world, ranging from northeastern India to southern China and Borneo. These acrobatic mammals are endemic to the dense forests of south and southeast Asia. They very seldom descend to the ground, swinging high above in the branches of trees. Their mode of movement is called brachiating. They can move through the jungle at speeds of up to 56 kph, bridging gaps as wide as 15 metres in a single leap.

Gibbons are tailless, with dense fur varying from cream to brown or black. Many have white markings on their faces, hands and feet. They live up to 25 years and grow up to 60 cm in height. They usually live in stable family groups of one adult male and one or two females with their offspring. They make loud, distinctive calls that echo through the forest and can be heard as far as  one kilometre away. They “sing” their duets usually at dawn and also later in the morning. The calls are thought to be used for marking their territory, as well as for enhancing pair bonding and family group cohesion.

In 2002, FFI rediscovered the rare cao vit gibbon (Nomascus nasutus) in Cao Bang province, northern Vietnam. Subsequently, in 2006, the species was also found on the Chinese side of the same forest, in Guangxi province. The cao vit gibbon or Eastern black-crested gibbon, previously thought to be extinct, is one of the most threatened primates in the world. Listed as Critically Endangered on the IUCN Red List, it is threatened by habitat loss and degradation and now remains only in the small Trung Khanh-Bangliang forest block straddling the Sino-Vietnamese border. Two conservation areas, namely the Trung Khanh Cao Vit Gibbon Species and Habitat Conservation Area and Bangliang National Nature Reserve, were established in 2007 and 2009, respectively, to protect this incredibly rare primate throughout its global range.

First of all, patrols were established to protect the area and the animals within it, before tracking and monitoring was done. Later, an area of approx. 1 600 ha was closed to the public and the Cao Vit Gibbon Species and Habitat Conservation Area in Trung Khanh (SHCA) was established. Hunting of gibbons, which had previously been carried out, stopped and is now no longer a major threat to the cao vit gibbon population

Understanding the population dynamics is also crucial to devising effective conservation measures. Regular population surveys have been conducted to monitor changes in the population size and distribution over time. These often involve setting up “listening posts” (vantage points on mountain tops), from which gibbons can be heard or observed. Each comprehensive survey of the transboundary population, which has been completed every two or three years since 2012, can involve up to 40 people. More recently, FFI has been experimenting with the use of an automatic acoustic device to provide passive monitoring data of the cao vit gibbon population.

Mergin Maps in the Conservation of Critically Endangered Species

A monitoring programme for the cao vit gibbon was launched in 2020. Phuong Nguyen notes that in the past all data collected during population surveys or patrols had to be collected with paper and pencil, with locations of sightings marked on paper maps. From the beginning of the specialised monitoring programme in 2020, Mergin Maps has been used and has proved to be a major advance in the tracking of gibbons and in the scientific research on this rare species.

Mergin Maps has greatly facilitated team members to be able to record precise data. Approximately twice per month, two teams of 6 to 9 members each go out into the field to monitor the gibbon locations.  The terrain is difficult to move around, due to the highly variable topology and danger of working in limestone forest areas. The teams learn about the movements and habitat use, as well as about the group composition and behaviour of gibbons, who are naturally hard to spot and afraid of humans. They feed mainly on fruits, leaves and flowers found in the forest. They live in small family groups, and move across the hilltops.

Back in the office, Phuong Nguyen coordinates all the data sent to her by the teams in the field. She can then draw up reports for FFI, which aid in the future conservation of this critically endangered primate.

According to Phuong: "The major benefit we got from working with Input is that, in the past with traditional paper datasheets and SMART (widely used tool for recording patrol data), we could only record the coordinates of surveyors (black triangle) and the estimated distance & bearing (angle) to the gibbon locations. With Mergin Maps Input, we can use the topography map and put a datapoint for each observed/heard gibbon, which provides more accurate spatial data."

2022 marks the 20th year of the cao vit gibbon conservation project in Vietnam. Efforts by FFI and partners over the past two decades have resulted in the establishment of a conservation area dedicated to the protection of the gibbon and to the stabilisation of the gibbon population at approximately 100 individuals. There has been no hunting or major habitat destruction over the last 15 years, while the previously degraded forests have been slowly recovering through natural growth as well as assisted natural regeneration (partially active planting to aid forest regeneration). Mergin Maps is proud to assist in this valuable conservation effort! 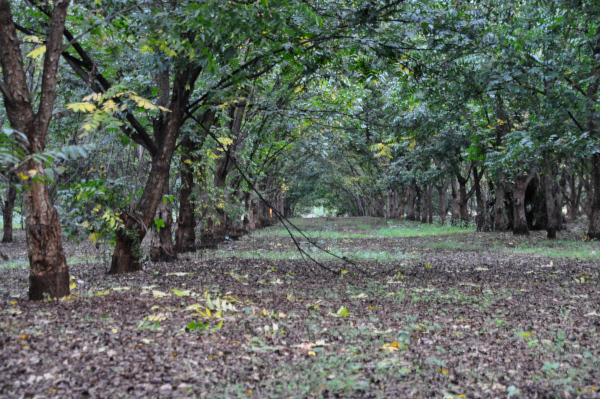 Waste Sampling in the Digital Era - Case of the Czech Republic